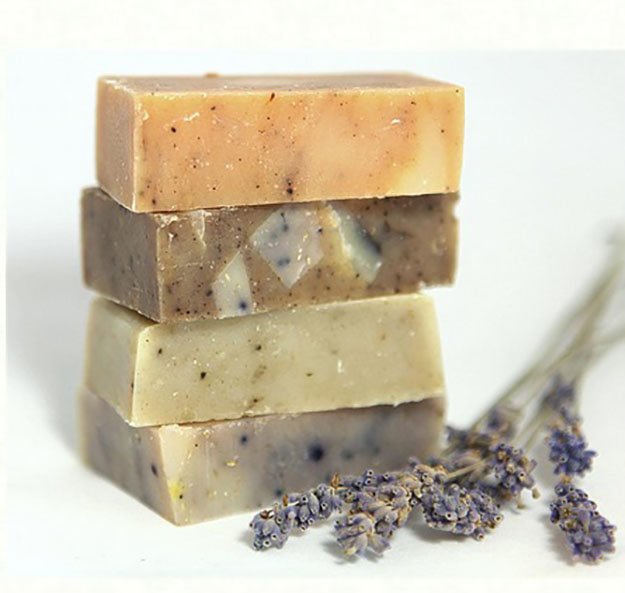 Goat Milk Soap Recipe – Stunningly Easy To Make It Yourself. Make this goat milk soap recipe using ingredients that are easy to find.  Sodium hydroxide (lye) can be found over at Amazon by clicking on this purchase lye link. You can also use canned goat’s milk, powdered goats milk or fresh, in the fridge section of your grocery store. Important information if you don’t have access to raw goat’s milk from your own goats or a friend willing to share. (find the supplies you need to make soap here)

Heat the solid oils until they are almost melted. Take the pot off the heat source. Swirl the oil until they melt the rest of the way. Add in the olive oil. Set aside to cool down to 100 degrees.

Mix the lye and water. Mix the lye into the water (Important note for controlling how fast the reaction happens). It will heat up so I like to use a tall container. A plastic pitcher works great even though there isn’t a whole lot of liquid in the bottom. I also like to put the pitcher in a basin of ice water while I am mixing the lye into the water. This get the mixture to cool down to 100 degrees faster.  Because I’m not a patient person myself, to speed up the cooling of the lye/water mixture you can slip a few ice cubes down the side of the pitcher.  When everything is 100 degrees mix the lye/water into the oils, give it a quick stir with a wooden or plastic long handled spoon then add in the raw goat milk.

Mix with your stick blender until trace. Your soap mixture should look like thick vanilla pudding. At this point add in a few drops of what ever flavor essential oil you wish and what ever extra pieces of stuff. Give it another swirl or two. Now you pour your mixture into soap molds or card board soup trays (even ramine boxes work) lined with wax paper. Cover with towels and let sit overnight. After about 24 hours dump out your soap, cut (here is a funny crinkle cut knife article I wrote), then let stand on end for several weeks to dry out. Enjoy!

When using a stick blender to get to the point of trace it is a good idea to start and stop the blender, not run it continuously.  I just use my stick blender as a spoon and turn it on intermittently as I’m waiting for the soap to trace.

If you happen to pour your soap into the mold before it has really traced and it separates you can always pour it back into your pot do this. Heat it up slowly and blend it some more until it reaches a real trace.

The other problem is going past the trace mark right into seized. Again you can recover from this. Grate the soap up then reheat (slowly) and add more goat’s milk (a little at a time) until it is no longer seized. Then just put it in the mold and let it set up.

Your Goat Milk Soap Recipe Has Seized What can you do?

You can prevent it by paying attention to the temperature and water amount. Soap cool and don’t discount your water. When you are using a new fragrance or essential oil and don’t know how it will effect your soap, make a one pound test batch first. If it is happening, don’t panic!

With a heavy seize that you can’t save, you’ve got three options!

Rebatch it – If you managed to get it into a mold but it is UGLY, you can rebatch it. Here are rebatching instructions. If you do it the day after, you usually won’t have to add additional water to it. If you rebatch it weeks later, you can add a bit of water to the shreds before cooking.

Chunk it – You can let your soap sit until solid. Cut it up into little chunks. Make a new batch of soap and add the chunks into the new batch. I’ve come up with some really nice

Why I love Goats Milk Soap

Of course if  you want to use goat milk soap much faster, you can always order it at HartNana’s store.

Hart Nana started out a world traveler living in cities and discovered her love of country living later in life. She loves to share her homesteading adventures and what she has learned in hopes that it might better your life and encourage you.

Hartnana.com is a participant in the Amazon Services LLC Associates Program, an affiliate advertising program designed to provide a means for sites to earn advertising fees by advertising and linking to hartnana.com (amazon.com, or endless.com, MYHABIT.com, SmallParts.com, or AmazonWireless.com). Thank you for supporting us.